Joshua Michel joins ISU Extension and Outreach as a field agronomist after working at the Muscatine Island Research and Demonstration Farm. While at the farm he was responsible for coordinating corn and soybean field studies that included planting, harvesting, tillage and pest management. Michel also took part in several field days and classroom events to educate area farmers and industry representatives on current research and best practices. Prior to working at the Muscatine Island Research Farm, Michel worked for DuPont Pioneer in Johnston, Iowa, for five years overseeing irrigation and fertilizer operations for greenhouses and growth chambers. 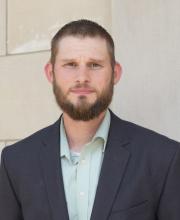 It’s the time of year when farmers and retailers turn to thoughts about next year’s growing season, including fall anhydrous ammonia (NH3) applications for the next year’s corn crop.  See Is it...

All it takes to start a fire is just a spark from an engine, an overheated bearing on a combine, or a hot exhaust manifold where some dirt and dry plant material have gathered. Dry plant residue, dusty conditions, low humidity levels and strong winds are a recipe for combine and field fires....

Topics will include fertility tests, cover crops, and evaluating soil health with a microscope

Soil Health and Grazing Field Days being held across Northeast Iowa on July 6, 7 and 8 Much of Iowa is currently abnormally dry or in some state of drought according to the latest U.S. Drought Monitor. If dry field conditions persist, the potential for combine and field fires this fall could...

Historically, corn silage harvest starts within the next two weeks. However, harvest has started early in some droughty areas with light soils. Corn is a high yielding, high energy, low protein forage that is commonly used for growing and finishing beef cattle, in cow-calf production systems,...